Dung Cakes from Book of a Thousand Days

Dinner -- dung cakes.  That's what we muckers call them, though I don't use that crude term around my lady, of course.  They're made of salted meat (simmered long to soften) and onions, wrapped in dough and cooked on coals.  That's how we used to eat them with Mama, only here I get to add spices -- cinnamon and peppercorns!

--Book of a Thousand Days, Day 6, by Shannon Hale

When I started creating recipes from fictional sources, I knew I'd have to go back and reread Book of a Thousand Days.  It's a fantastic fairytale-retelling set in a fictional Mongolia.  There's a number of things I could have cooked up from this book (stinging nettles are, after all, in season right now) but dung cakes seemed the most iconic. 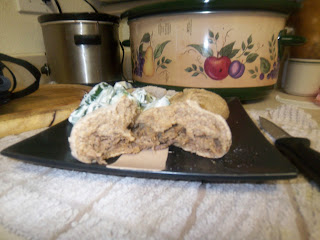 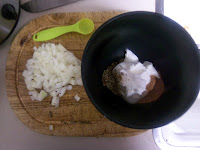 Combine the yogurt, onions, cinnamon, and black pepper.  No, the book doesn't specify simmering in yogurt, but yogurt's ubiquitous in this setting, and it's something they have in powdered form.  It made culinary sense to me.

Put the beef in a small crockpot and cover with the yogurt mixture.  Cook on high for three hours.  I used bottom round roast, but pretty much any cheap cut of beef will work.  Bone-in is fine, too; the meat will fall off by the time it's done cooking. 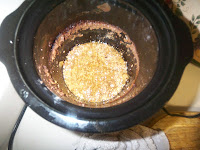 Shred the meat and mix in the brown bits from the bottom of the crockpot.  I almost tossed out the yogurt version.  During the long cooking process, it turned to this brown crud.  Then I tasted said brown crud, and much like the brown bits on the bottom of a pan, it had a lot of flavor.  A tangy, salty flavor.  I thought that was really nice with the meat, and, oddly enough, it made the whole thing look a lot more like dung than creamy, white yogurt would. 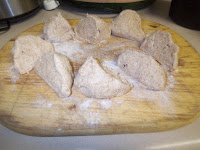 Make the dough: put the dry ingredients in a bowl, then add the oil and water.  Mix, let it rise for at least ten minutes, then cut it into eight equal parts.  This dough is just my family cookbook standard pizza dough.  Store-bought pizza dough would work just as well. 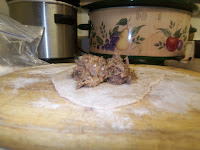 Roll out one of pieces of dough, place an 1/8 of the meat mixture on top, then pinch the edges together.  Repeat with remaining dough and meat.  This is a sticky enough dough that it should pinch together without any kind of problems. 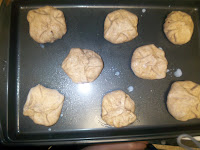 Place the finished buns on a baking sheet.  Brush each one with a little milk.  Cook at 350 degrees for about twenty minutes, or until the dough is done.  The dough is fairly lean, so brushing it with milk helps ensure that the dough stays soft instead of crisping during the baking process.

I was pretty happy with the results -- and they were very filling.  A little yogurt-cucumber salad to go with, and we had a great dinner.

Also, Shannon Hale recently put up a bunch of international covers for Book of a Thousand Days.  If you're interested, the post is here.
Posted by MKHutchins at 7:49 PM