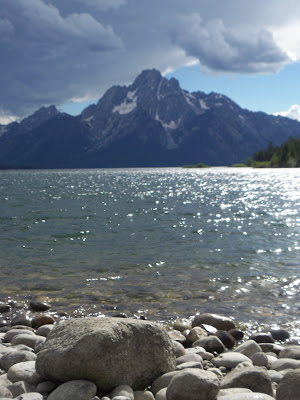 I've been away from the computer.  So, instead of a post, I have a picture for you this week.  Yes, I miss it -- the Tetons are gorgeous.  It was wonderful to spend some time just playing or thinking, without a computer or dishes to keep every second occupied.

I ran into yet another post arguing that writing isn't about hard work and persistence -- it's about inborn talent.

That argument drives me nuts.  Not only do I think it's untrue, but the talent-or-nothing paradigm hurts writers.   If writing is about inborn ability, the writer has no accountability.  It's out of your control.  Good writing is something that happens to you...or not.  Bad prose?  Nothing you can do about it -- it's in the stars.

On the other hand, if writing is a skill, then improvement is in the author's control.  You can write another story.  Gets some critiques.  Revise, rinse, and repeat.  You can take action.  When learning is a possibility, you can ask, "What can I do to improve?"

I don't think anyone succeeds as a writer without a lot of hard work.  Maybe a bucket of natural ability will get you there a little faster, but it won't get you there.

As evidence that writing can be learned, I submit this episode of Writing Excuses (click here).  This is the opening of Brandon Sanderson's first, unpublished novel.  It's...umm, well, the Writing Excuses does a great job ridiculing it.  Between that and Elantris, something changed, and I'm sure it took a lot of hard work, practice, and skill-honing.  Brandon Sanderson's now one of my favorite authors.

As a footnote, in my experience, the best writing teachers are those who learned something the hard way.  The author whose lecture taught me story structure?  He used to fumble with it.  The author with brilliant posts on point of view?  I asked her -- and she struggled with POV.  Because they didn't do these by instinct, they can happily articulate their skills to others.

Yes, writers likely have something they're naturally good at -- maybe someone has an ear for dialogue, or a knack for description.  But dialogue and description can still be learned.

A Comparison of Deck-Building Games

I adore deck-building games.  The combination of skill and luck makes for plenty of puzzling and adrenaline.

If you're not familiar with this kind of game, here's the basic idea: everyone starts with a few cards.  You shuffle this deck and draw a hand (often five).  You use those cards to buy other cards (or take other actions), then discard the whole lot.  When you run out of cards, shuffle everything that's discarded, and go again.  As the name indicates, you "build" the deck that you use to play the game -- trying to secure strong cards and thin out weak ones while keeping a balanced deck that will yield, on average, good hands.

Dominion (from Rio Grande): This is the game that invented deck-building.  The other games I list here, I enjoyed because they deviated from Dominion in some incredible way.  The game itself is fairly quick, which means it's easy to pull it out and play several games in a row.

I actually had a hard time picking up the rules because no one bothered to explain them to me -- they were too eager to play and I had to learn by watching.  But, being a new player isn't a huge disadvantage.  The cards available to buy change every game, so there's not one master strategy to victory.  The downsides?  The cards have a decent bit of text on them, which means pausing for people to read and re-read cards.  Also, there's lots of shuffling.

Puzzle Strike (from Sirlin Games): It's shiny, pink, and adorable.  Also, it's about violently destroying your opponents.  This is my favorite deck-building game...which is technically not played with a deck, but with pog-sized chips.  No shuffling.  Toss the chips into the bag, shake, draw.  I love fiddling with them until it's my turn.

Like Dominion, the chips change every game, keeping things fresh.  Everyone also gets a character with their own special chips.  But there are no victory points.  It's a last-man-standing, get-your-opponents-to-crash kind of game.  It also plays super-fast.  Multiple games are a must.  Added bonus: you draw more chips the closer you are to losing, so it's quite possible to catch up from the brink of despair.

ETA: The 3rd edition has made some major changes to the game, changes that I think sadly steers the game into randomness and kingmakers and away from a kind of balanced chaos.  I'm very happy I have an earlier edition.

Nightfall (from AEG): Scary horror creatures and a dark art scheme usually aren't my thing, but Nightfall just plays so well.  Everyone gets a private supply of cards, chosen draft-style, in addition to whatever ends up in the middle.  The unique chaining mechanism means that you often get to play cards on other people's turns...which is complicated to explain without the game in front of you.  But trust me, it's neat and engaging balancing what to play when -- a few cards here and there?  A huge chain on your own turn?  Buying cards isn't just about the best thing you can afford, but what's going to chain with your deck.  Ah, choices.

At the end of the game, the player with the fewest wound cards win.  Part of the game is thus also trying to look like you're not winning so your opponents attack someone else.  I know a few people who find this frustrating, but the back-stabbing fits the game.

Quarriors (from WizKids): The shortest of all the games listed here.  And probably the one with the most luck.  It's played with dice instead of cards.  The dice you buy to build your hand might give you that giant dragon you need to defend yourself...or it might just give you money to make another purchase.  This game has the most luck of any of the games listed here, but it's also the shortest, and custom dice are fun, so it balances out.

The version I played did have a runaway leader problem, but I've been told the rules have been adjusted in the newest edition.  The changes made a lot of sense and would smooth out the problem.  Even with the problem, I still enjoyed the game.  It was short enough that if I was doomed to loose, I could wait ten minutes for the game to end, then jump back in again.

Eminent Domain (Tasty Minstrel Games): In some ways, this game makes me think of Race for the Galaxy in deck-building form.  It contains a bucket of cool mechanics that would be difficult to explain without the cards laid on the table.  But, in short, the more you use an ability, the more your deck fills up with that type of card.  And, like Nightfall, you can play on other people's turns.  The gameplay here runs a bit longer (tied with Nightfall at 45 minutes), allowing for more long-term strategy.

The only downside is the set cards.  The card available never change, meaning you only have to adjust your play to what's in your hand.  Often, I don't like expansions (they tend to add fiddly-bits without increasing my enjoyment of the game), but I hope Eminent Domain comes out with one to increase replay value.

Any favorites that I left out?
Posted by MKHutchins at 7:51 PM 7 comments:

My review of Throne of the Crescent Moon is up on Bookshop Talk (click here).  This book kept me company on two overnight bus trips -- it's fantastic.
Posted by MKHutchins at 9:35 AM No comments: