"He'll be like this for fifteen seconds, then he'll throw the knife straight ahead of him, and then he'll speak in fluent Quirmian for about four second, and then he'll be fine.  Here -- " she handed Moist a bowl containing a large brown lump "--you go back in there with the sticky-toffee pudding and I'll hide in the pantry.  I'm used to it."
--Making Money by Terry Pratchett, Chapter Four

I read Terry Pratchett's Going Postal this week, and I have to say, it's my favorite Discworld book so far.  Unfortunately, I've only read eight of them; it took me too many years to pick up these books.  I'm halfway through Making Money, the sequel, but paused to bake. 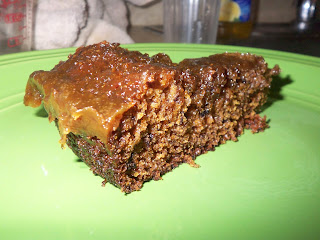 I'd never made sticky toffee pudding, but it sounded old-fashioned and delicious.  Only one of these is true.  The history of the dessert is somewhat muddled, but generally, Francis Coulson is credited with creating it in 1960 -- making it a century more modern than I thought.  The recipe below is based on Coulson's original.

1. Preheat the oven to 350 degrees Fahrenheit.  Cream together the butter and sugar, then mix in the eggs. 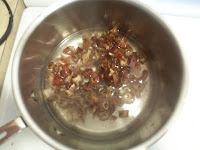 2. Bring the water to a boil and add the chopped dates.  It's possible to get pre-chopped dates that are covered in some kind of powdery substance.  They tend to be hard and bland.  Whole, pitted dates are sticky and taste like honey.  Winco (if you have one) sells them cheaply in bulk.

3. Add the baking soda to the date mixture, then add the dates mixture, flour, and pinch of salt to the creamed mixture and stir until smooth. So, yes, the date-water goes in, too.  All sweet and delicious. 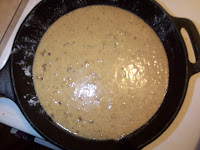 4.  Butter and flour a 10-inch cast iron skillet.  Pour the batter into the skillet and bake for 20-30 minutes, or until just set. All right.  You could use some other kind of 10-inch pan, but given the toffee-flavors, and the way cast iron caramelizes the edges of cakes and brownies...well, yum.  Though, if you choose another type of pan, it will probably take longer.  Coulson's recipe calls for 30-40 minutes...so I'm glad I checked my cake part-way through.  It finished at 22 minutes. 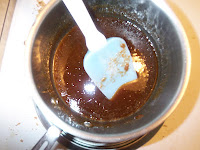 5. Meanwhile, make the toffee sauce.  Put a small sauce pan on medium-low and add the butter until melted.  Then add the brown sugar and cook for about five minutes, or until the brown sugar is thoroughly melted.  Add the milk, stir, and set aside.  This one takes some explanation.  All the toffee sauce recipes called for heavy cream.  I didn't have any on hand.  But to make toffee, you take 1:1 ratios of sugar and butter and boil it to a hard crack (well, roughly that's how it goes).  Surely I could just undercook it?  Unfortunately, the sugar and butter never emulsified.  But the bit of milk at the end worked to bind it together into something fantastic (it also spluttered at first, so you're warned).  I plan on making this again and seeing if adding the milk at the beginning works just as well -- I'll update this post when I do.**  The finished sauce should make soft balls when dropped into a cup of ice-cold water. 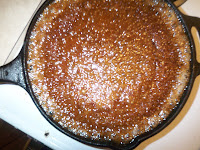 6. Pour the toffee sauce over the hot cake and return it to the oven for 2-3 minutes, or until the toffee is bubbling.  Once the pudding's out, you could either eat it warm with some icecream or refrigerate it.  It's summer.  I went for the fridge.  The toffee sauce penetrated the top of the cake, making a moist-sticky top that was perfect for the hot day.  The toffee at the edge of the pan turned into a chewy toffee collar that's my favorite part of the whole thing.  We will be making this again.

*Whole wheat white flour is flour milled from hard white wheat berries, as opposed to the hard red wheat berries that's standard in the US, at least.  Whole wheat white has all the healthy goodness from being a whole grain, but its taste is much milder than hard red wheat.  Unfortunately, not all grocery stores seem to carry it.  If you need to substitute, trade it out for all-purpose white flour.

**I tried adding the milk at the beginning.  It meant I needed to cook the sauce longer, which gave me an over-caramalized, almost burnt taste, instead of toffee deliciousness.  So, stick with adding the milk after the brown sugar's thoroughly melted.
Posted by MKHutchins at 7:20 PM No comments:

I've had a request to put up some advice on writing short stories.  I think one of the biggest challenges with short stories is that there are so many ways to do them right. Short stories can read like mini-novels (try Eric James Stone's  "Rejiggering the Thingamajig") but they can also explore avenues that novels typically eschew.

For example, Terry Bisson's  "They're Made Out of Meat" is written completely in dialogue.  Nancy Fulda's "Movement" utilizes a unique point of view.  Short stories can also hide crucial information from the reader until the very end, like in Terra LeMay's "Dark Wings".  After investing hundreds of pages in a novel, I expect something to be different at the end, but short stories can leave us exactly where we started -- like in Frank Stockton's "The Bee Man of Orn".

All of these viable options actually makes writing a good short story difficult.  So, if you're working on short fiction but you're stuck, here are some ideas.

1. Start with traditionally-plotted stories.  If you're having difficulty being decisive or getting started, limiting your options can help.  Write a murder mystery.  Retell a fairy tale.  Plot a heist.  Using an existing framework can help get a story down.  Writing, I'm convinced, is the best way to learn about writing.

2. Critique short stories.  I learned buckets about what does or doesn't work from reading slush at Leading Edge for years.  Given that most people don't have a magazine handy to volunteer at, I'd reccomend signing up for Critters.org and regularly critiquing stories there.  Reading finished short stories is great...but analyzing stories in their rough form teaches you how to fix stories, not just what the polished end product looks like.

3. Have others critique your short fiction.  There's a lot of writing advice, much of it polar opposites.  How do you know if you're bombarding the reader with too many setting details, or if you suffer from white room syndrome?  Are you trying to cram too many plot points into a short story, or is nothing much happening?  Good critiquers will tell you what their reading experience was like, allowing you to pick out a story's weaknesses and improve your skills.

Posted by MKHutchins at 6:40 AM No comments:

It always makes me stop when someone call a book they've written their "baby."   Books aren't babies. One is a string of symbols that creates meaning in our minds.  The other is a human being.  I read one such article recently, and instead of rambling at my poor husband, I made a list.  I decided to post it here, because I thought my readers might get some amusement out of it.


1. Hugs and kisses have never made my manuscript all better.

2.Manuscripts should be edited ruthlessly, their every fault exposed under a red pen.  I try to encourage my children not to color on themselves -- in red, or any other color.  Also, we say "I love you" a lot more than "You're dangling a participle!"

3. There's nothing in a manuscript that I didn't type.  I'm still not sure where the kids came up with the idea of having an imaginary pet purple zombie dog.

6. Manuscripts only work as an alarm clock if someone drops a printed version on your head. Babies are naturals at it.  The older model, toddler, comes armed with hugs and demands for apple juice.

7. I can throw a frustrating manuscript in a drawer and ignore it for months or years.

8. Manuscripts don't poop and then giggle about it.

10. Manuscripts can be completed, finished.  I'm all grown up, but my mommy still watches out for me.

Email ThisBlogThis!Share to TwitterShare to FacebookShare to Pinterest
Labels: rambles

I have a guest post up at Gem State Writers, entitled Smell the Sagebrush.  Some thoughts on using the familiar in writing, research, and the beautiful state of Idaho.
Posted by MKHutchins at 7:21 AM 2 comments:

Write Up on "Blank Faces"

IGMS keeps up a cool blog where authors talk about where their stories came from.  If you're interested in the story-behind-the-story for "Blank Faces", you can check it out here.
Posted by MKHutchins at 6:10 AM No comments: