Book and Board Game Match-Up: Race for the Galaxy and The Golden Age 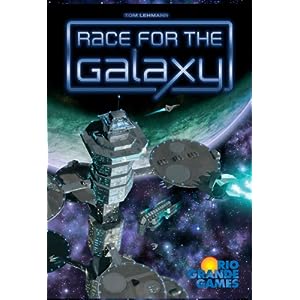 The Game (from Rio Grande Games): In Race for the Galaxy, players build galactic civilizations by game cards that represent worlds or technical and social developments.Each round consists of one or more of five possible phases. In each round, each player secretly and simultaneously chooses one of seven different action cards and then reveals it. Only the selected phases occur. For these phases, every player performs the phase’s action, while the selecting player(s) also get a bonus for that phase.--Manufacturer Product Description

The Book (by John C. Wright): Phaethon, of Radamanthus House, is attending a glorious party at his family mansion celebrating the thousand-year anniversary of the High Transcendence. There he meets an old man who accuses him of being an imposter, and then a being from Neptune who claims to be an old friend. The Neptunian tells him that essential parts of his memory were removed and stored by the very government that Phaethon believes to be wholly honorable. It shakes his faith. He is an exile from himself.
And so Phaethon embarks upon a quest across the transformed solar system -- Jupiter is now a second sun, Mars and Venus terraformed, humanity immortal -- among humans, intelligent machines, and bizarre life-froms that are partly both, to recover his memory, and to learn what crime he planned that warranted such preemptive punishment.  --Inside Jacket Copy

Science fiction this week!  My husband recommended The Golden Age to me some time ago.  Left without books from the library, I finally picked it up this week.  I shouldn't have waited.  I've read science fiction that feels like a compilation of books I've read before, but I've never read anything like The Golden Age.  It was a little difficult at first -- steep learning curve -- but piece by piece, the story immersed me.  It wrung my mind out and I still have that happy dazed euphoria of reading something truly worth pondering after the last page is done.  I'm still amazed that John C. Wright was able to create such a distant, vivid society, and make me care about its workings.

Race for the Galaxy had that same, creeping effect on me.  I didn't get it the first time a played it -- usually I'm pretty quick on the uptake, but I felt like I hadn't grasped it.  Several games later, I know what I'm doing, but the strategy possibilities are expansive.  I find myself guessing, working, looking for new angles to play.  It keeps my head working hard.

That's why these feel similar to me.  They make me think, they make me stretch.  The Golden Age unfurled a vast civilization for scrutiny; Race for the Galaxy offers a myriad of strategic plans to explore.

Posted by MKHutchins at 9:38 PM