Book and Board Game Match-Up: Eats, Shoots, and Leaves and Prolix 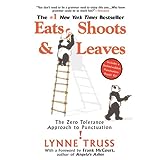 The Book (by Lynn Truss): A panda walked into a cafe. He ordered a sandwich, ate it, then pulled out a gun and shot the waiter. 'Why?' groaned the injured man. The panda shrugged, tossed him a badly punctuated wildlife manual and walked out. And sure enough, when the waiter consulted the book, he found an explanation. 'Panda,' ran the entry for his assailant. 'Large black and white mammal native to China. Eats, shoots and leaves.' We see signs in shops every day for "Banana's" and even "Gateaux's". Competition rules remind us: "The judges decision is final." Now, many punctuation guides already exist explaining the principles of the apostrophe; the comma; the semi-colon. These books do their job but somehow punctuation abuse does not diminish. Why? Because people who can't punctuate don't read those books! Of course they don't! They laugh at books like those! Eats, Shoots and Leaves adopts a more militant approach and attempts to recruit an army of punctuation vigilantes: send letters back with the punctuation corrected. Do not accept sloppy emails. Climb ladders at dead of night with a pot of paint to remove the redundant apostrophe in "Video's sold here". -- Amazon Book Description 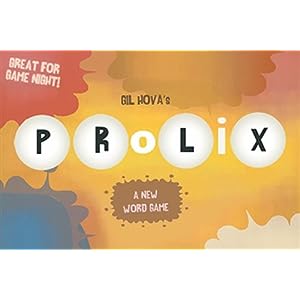 The Game (from Z-Man): In Prolix players score points by coming up with words whose letters match those of the tiles on the board. Unlike other word games you don't need all the letters of a word to be on the board to use that word. This means that you are free to use all those words you always wanted to use in other word games but were always a few tiles or cards short. Of course the letters in your word won't score if they aren't on the board so even huge words can be stinkers if you don't use them at the right time. Letters score based on how rare they are and where they are on the board. Once you finish scoring your letters all tiles move across the board changing their value. If you have a great word but it's not your turn, you're allowed to interrupt another player's turn and score. But be careful because you can lose points by interrupting with low-scoring words. And of course other players can interrupt your turn if they wish or even force you to say a word by flipping the timer. --Amazon Product Description

Both of these are just plain fun in a word-nerdy, language-loving way.  Yes, Eats, Shoots, and Leaves is filled with hilarious examples of poor punctuation.  Generally, I'm too busy chuckling to realize I'm also learning something.  I heard the joke about the panda years ago, but that only made me happier to pick up the book.  Who doesn't need more books with grammar-loving pandas on the cover?

Prolix is a treat, too.  Don't get me wrong, I enjoy other word games, but sometimes piecing together tiny words feels limiting.  The first time I played Prolix, I got to score "derivatives."  Ah, that calculus class did me some good!  18 points!  The game description sums it up pretty nicely.  I love the interrupt game mechanic.  Even if it's not my turn, I still need to wrap my head around the letters, so there's no down time waiting for someone else to finish up.  I'm always engaged.  As a bonus, there's also a challenging set of rules for solo play.  The only downside of the solo game is that my husband doesn't look impressed when I tell him I won (he should; it was hard).