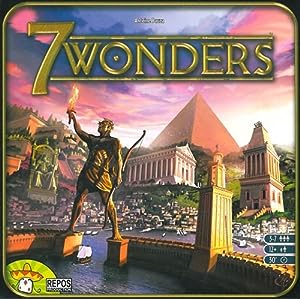 The Game (from Asmodee): 7 Wonders lasts three ages. In each age, players receive seven cards from a particular deck, choose one of those cards, then pass the remainder to an adjacent player, as in Fairy Tale or a Magic: the Gathering booster draft. Players reveal their cards simultaneously, paying resources if needed or collecting resources or interacting with other players in various ways. (Players have individual boards with special powers on which to organize their cards, and the boards are double-sided as in Bauza's Ghost Stories.) Each player then chooses another card from the deck they were passed, and the process repeats until players have six cards in play from that age. After three ages, the game ends. In essence 7 Wonders is a card development game along the lines of Race for the Galaxy or Dominion. Some cards have immediate effects, while others provide bonuses or upgrades later in the game. Some cards provide discounts on future purchases. Some provide military strength to overpower your neighbors and others give nothing but victory points. Unlike Magic or Fairy Tale, however, each card is played immediately after being drafted, so you'll know which cards your neighbor is receiving and how his choices might affect what you've already built up. Cards are passed left-right-left over the three ages, so you need to keep an eye on the neighbors in both directions. --Amazon Product Description 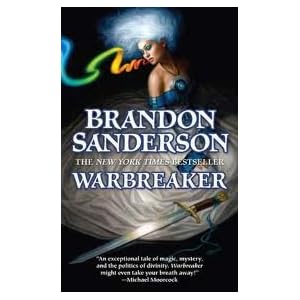 The Book (by Brandon Sanderson): Warbreaker tells the story of two princesses, Vivenna and Siri. Vivenna was contracted through treaty to marry the God-King of rival nation Hallendren. Instead Siri is sent to meet the treaty. Vivenna then follows to Hallendren in hopes of saving Siri from her fate. Both sisters become involved in intrigues relating to an imminent war between their home nation of Idris and Hallendren. -- Wikipedia

Both of these are about nation building.  In 7 Wonders (which just won the Kennerspiel des Jahres!), you can choose a variety of strategies to win – military, science, markets, monuments, etc.  In Warbreaker, the broad cast of characters tries to manipulate a nation with varied approaches, from subtle suggestions to outright warfare.  Part of the enjoyment of 7 Wonders is deciding what strategy you’ll use; in Warbreaker, it’s figuring out who’s using what strategy to accomplish what goal.


My favorite thing about 7 Wonders is that it’s played drafting-style, and as far as military and trading go, you only deal with your neighbors.  Effectively, this means that you can actually play with seven people and have the game move as quickly as if it were only three.  I love elegant strategy games, but when you toss in lots of players, they usually slow to a crawl and it’s impossible to keep track of what everyone’s doing.  7 Wonders is always fast-paced, and as an added bonus, the art is gorgeous – the kind of stuff that really should be on my walls.

Being someone who both enjoys subtle strategy, political maneuvering, and sweeping colors, I heartily recommend both 7 Wonders and Warbreaker.
Posted by MKHutchins at 8:12 AM