Book and Board Game Match-Up: The Hanging Gardens and Shadow Spinner 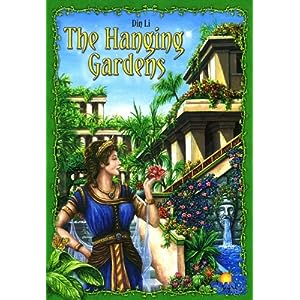 The Game (from Rio Grande): The hanging gardens were one of the 7 wonders of the ancient world, as all history courses teach. But, did they actually exist? Nothing remains of their reported splendor, which was built for the eyes of Amyitis. Without an exact reference to follow, players will re-build the hanging gardens according to their own tastes. Card follows card with magnificent buildings, sparkling fountains, and exotic plants as the players work to rebuild the legendary gardens. In the end, the queen will be pleased and rewards the victory palm to the player whose work on the gardens most impresses her highness.--Amazon Product Description

The Book (by Susan Fletcher): Every night, Shahrazad begins a story. And every morning, the Sultan lets her live another day -- providing the story is interesting enough to capture his attention. After almost one thousand nights, Shahrazad is running out of tales. And that is how Marjan's story begins....
It falls to Marjan to help Shahrazad find new stories -- ones the Sultan has never heard before. To do that, the girl is forced to undertake a dangerous and forbidden mission: sneak from the harem and travel the city, pulling tales from strangers and bringing them back to Shahrazad. But as she searches the city, a wonderful thing happens. From a quiet spinner of tales, Marjan suddenly becomes the center of a more surprising story than she ever could have imagined.
I realize that the time periods for these are different, but I love the rich, Middle Eastern theme running through both of these.  There are a number of games and books set in this area, but these both focus on places of beauty: the hanging gardens, and the Sultan's harem.  Well, what's left of the harem.  Shahrazad's story is ancient (it's the frame story for One Thousand and One Arabian Nights) and one I've always loved.  The Sultan had been marrying a girl every night and killing her in the morning, until Shahrazad braved marrying him to save others, armed only with her skill for storytelling.  Susan Fletcher draws me right into this tenuous world, throwing Marjan -- a girl with her own strengths -- into the mix.
The Hanging Gardens is a clever strategy game.  The cards are divided into six cells, with each cell either blank, or filled with a garden type.  Players overlap the cards to create sets of three or more of a kind.  When a set's created, players take one of the available scoring tiles (which themselves come in sets).  I love spacial games.  Usually tiles are involved (like with Carcassone), but I'd never seen a game with an overlapping card mechanism.  It always leaves me chewing my lip -- cover up this, or cover up that?
Both Shadow Spinner and The Hanging Gardens are are fun, engrossing, and leave me feeling like I've traveled a step away from home.  As a bonus, here's a recipe for the mind-meltingly-good Turkish dish Hunkar Begendi.  Apparently I shouldn't type while hungry.  My recipe book also calls for fresh-chopped tomatoes on top, along with parsley.
Posted by MKHutchins at 8:00 AM