THE CORAL PALACE, the sequel to THE REDWOOD PALACE, is now available for preorder. Also, I can quite happily say that the third and final book is turned into my editor.

I've had some people ask how to be supportive of the series. One of the best things you can do to help the books reach more people is to simply leave a short review on Amazon. 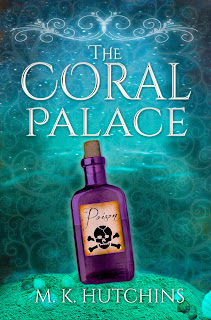 Plum would love to work as Lady Sulat’s chef and spend her days crafting healing foods, but it isn’t safe for her to stay in the capital. She knows far too many of the king’s secrets. Lady Sulat proposes sending Plum away on a covert mission.

Learn all about poisons. Learn how to defend against them. Head into dangerous territory.Unfortunately, Plum has to rely on her sister for support...the sister who isn’t even the tiniest bit sorry for nearly getting Plum executed. Her poisons teacher is an old enemy. And, given the secretive nature of what she’s doing, Plum can’t even openly talk to Bane about it.But Plum is going to give it her all. After what she’s seen of war, she’s willing to take any risk and pay any price to secure peace for Rowak.

Posted by MKHutchins at 7:08 AM