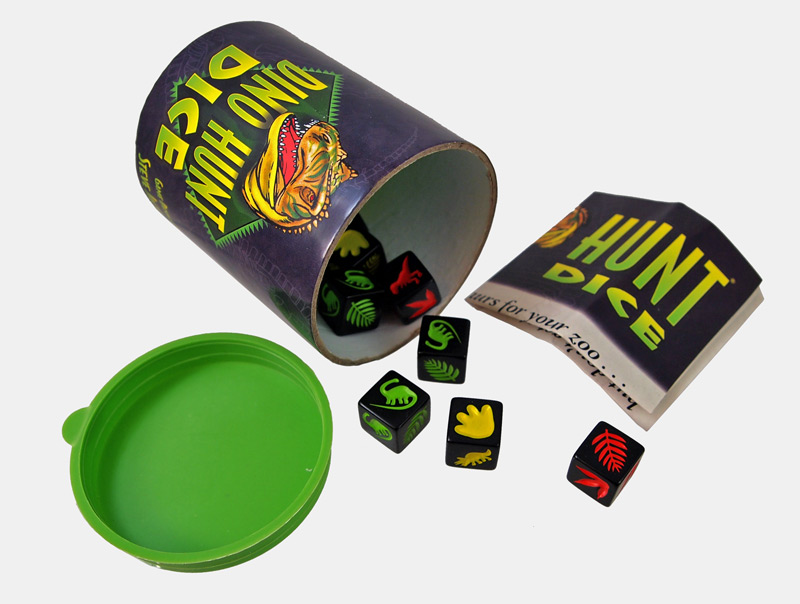 At Salt Lake ComicCon, my kids discovered Zombie Dice. They loved it, but there's something really unnerving about hearing a five-year-old cheer, "Yes! More brains!"

So I was really happy to discover Dino Hunt Dice. It's also made by Steve Jackson Games and has almost-identical rules. Instead of brains, you collect dinosaurs.

Usually I'm a big fan of games with a fair amount of strategy and choice-making. This isn't that game. Dino Hunt Dice only has one choice to make -- whether or not you want to keep what you have or roll again and chance losing it all (here's the complete rules). There's a certain amount of calculated risk and probability involved, but this is no Euro game. So...why pick this game up?

You need something short. The game plays in about ten minutes, so it's perfect for moments when you really just don't have time to break out an hour-long game but want to be able to play something with your kids. It would work as a quick filler game for gaming groups, too -- or as a way to determine who gets to pick the next, heavier board game for the group to play.

You need something simple. This is the kind of game one can literally play one-handed. The rules are easy peasy. It would be an easy game to get non-gamers to play. A great game for people who want to chat more than strategize. I don't have any very young novice board game players right now, but this would be a great game to introduce to a three-year-old. The luck element is heavy enough that they have a good chance of winning, but the game is still ten thousand times more interesting than Candyland. I'm excited to have a game that I'd willingly play with other adults that can also be accessed by kiddos still learning how to roll dice. And unlike a lot of dice games where there's some real score keeping involved, here you just have to be able to keep a running tally to twenty.

You need something portable. The whole game comes in a cup that would fit in most purses. It wouldn't be a bad game to just keep stashed in the car, and it's almost certainly going to be traveling with us. No need to worry about busted corners on boxes or finding space for it.

This game is no Settlers of Catan. It's not amazing or revolutionary. But I'm grateful to own it for those moments when we need short and simple and pulling out an absolutely brilliant game just isn't feasible. The kids have played it with me and by themselves I-don't-know-how-many-times. It seems easily worth the ten dollars we paid for it.
Posted by MKHutchins at 10:18 AM

Email ThisBlogThis!Share to TwitterShare to FacebookShare to Pinterest
Labels: board game, kids, reviews