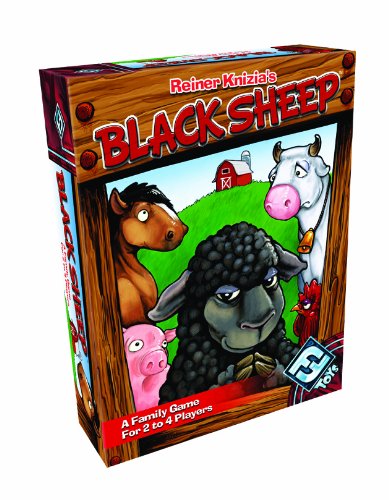 I think this is the first boardgame I've come to because of the artist. I went to Ursula Vernon's website to check out her work and found Black Sheep. It had Ursula's delightful art, it was published by Fantasy Flight, and the designer's name looked familiar too. Google informed me that's because Reiner Knizia's done a lot of board games that I've played before.

How had I never heard of this game? I quickly acquired a copy.

The day it showed up, we played it six times. Twice in the afternoon with the kids. Twice with the kids and husband after dinner. And then twice more with just my husband that evening. Because it called, siren song-like on the shelf, and we couldn't leave it alone.

Black Sheep is a fast game with the feel of a more complex worker placement or bidding game. It's also a good deal like playing three simultaneous hands of Texas Hold 'Em.

Three fields are placed in the middle of the table, each with two animals on it. Players each have a hand of three cards, and take turns playing cards on their side of the field. When each player has three cards on their side, the field is scored. Between the animals on their fields and their own cards, players looks at their combinations of animals. One player might have a four-of-a-kind, another a full house, and another two pair. The player with the best combination (in this place, the four-of-a-kind) wins. They take the two animals and place them on their own coral.

The little animal figurines each have numbers stamped on the bottom -- victory points for the end of the game. Black sheep, however, count negative against your score! There are also end-of-game bonuses; one for whoever has the most of each type of animal, plus bonuses for having a complete set of animals. There are option mission cards, but we haven't added that extra layer of complexity yet.

PROS:
*It's a good balance of luck and skill. That makes it great for families -- older players are still engaged and younger players can still win. This would also be great for a gaming group where there's a mix of hard-core boardgamers and people who want to try something new, but are intimidated by complex games with lots of components. (I should probably note that my 5-year-old has better strategy than me, anyway. He's happy to throw down the best cards he has and keep going. I tend to use some fields as essentially discard piles so I can look for just the perfect card to win somewhere else. The first game we played, he beat me 41 to 8. No, that's not a typo.)

*It's short. Also good for families, or a quick inbetween game at a group while waiting for people to show. It also means that the luck factor isn't devastating -- if the cards hate you this game, it's okay. There will be another game. Soon.

*Your hand is always three cards. We skip a lot of card games because the kids aren't coordinated enough to fan out and hold a dozen cards at a time. No problems here.

*It's easy to learn. I had to read the rules twice to get the hang of it, but only took a minute to teach my husband. The kids got the game play quickly, though it took them a few game to memorize which kinds of combination were better. They do not have any passing familiarity with poker.

*Cute animals! Both in the arts and in the little pieces.

CONS:
*Fantasy Flight always makes games with top-notch components, so I was surprised the fields weren't made out of something heavier. On the flip side, I wouldn't mention it if it were another publishing company. They look nice, and it probably helps keep the price of the game down.

*Cards are small, but I don't think it'd fit on my table well, otherwise. It means they're easy for my kids to hold, but hard for me to shuffle. There's a moderate amount of shuffling in a 3-player game, and quite a bit in a 4-player game.
Posted by MKHutchins at 1:55 PM