I know I usually do comparisons or make lists, but Catan Junior deserves an entire post to itself.

How well does this compare to Catan? The Catan we know and love? The Catan that can be recreated entirely out of cookies, cupcakes, or what-have-you?

It feels like Catan, not a random game with the name slapped on. It plays a lot like Catan. And I think the way it's scaled-down and simplified for kids is brilliant. Let's start at the top:

Components: Catan Junior has the quality and feel of a great Euro-style game. The colors are kid-friendly and bright, but also beautiful. 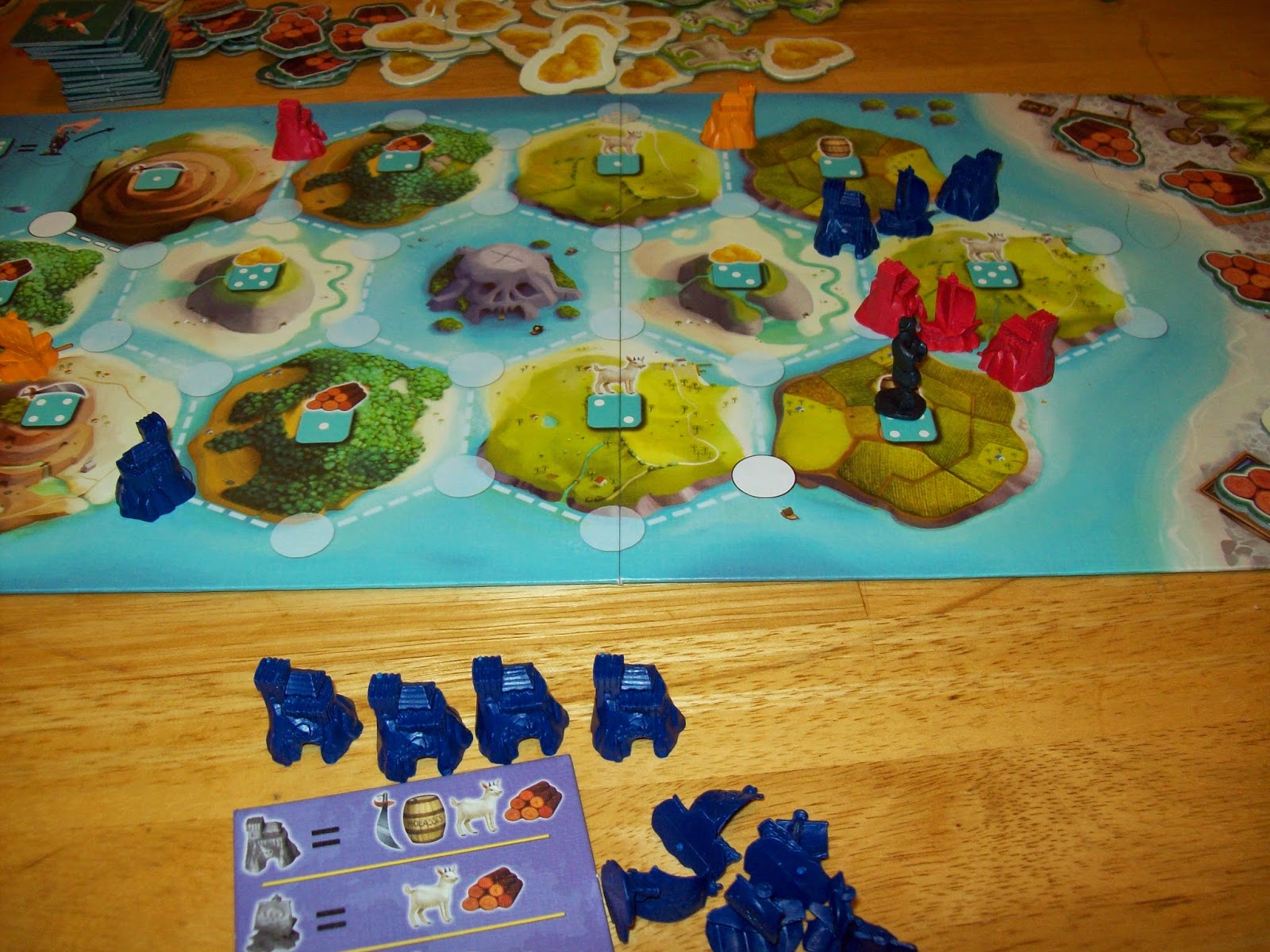 Unlike Catan, there aren't resource cards, but hefty, well-constructed resource tokens (which you can kinda see in the top of this picture). They're easy to handle. They feel nice. I like boardgames with fiddle-worthy pieces, and these live up. In a game where secrecy isn't paramount, I think this was a smart switch. We can work on holding cards and not flashing them to other players in a game with less going on (like Go Fish).


Even the Coco Cards (er, development cards) are made out of this hefty stuff. Nothing gets bent or dinged. Which makes the design of the box insert possible: there are two large oval plastic bins.  Plastic ships and forts go in one side, everything else in the other. No tiny compartments and tricky plastic bags. This game is easy for kids to put away. Set-up takes a bit more time, but the kiddos are pretty proud that they can be grown-up and do it themselves. While they set up, I have a minute to wrap up whatever I'm doing so I can play, too. Perfect.

Awesomely, the board is also double-sided -- there's a 2-player side and a 3-4 player side. If there are at least two of us who want to play, we can pull it out.

Oh, and I can't forget about the forts and the ships. Yes, you build forts instead of settlements and ships instead of roads (or...umm, ships if you have Seafarers). And behold how detailed the forts are: 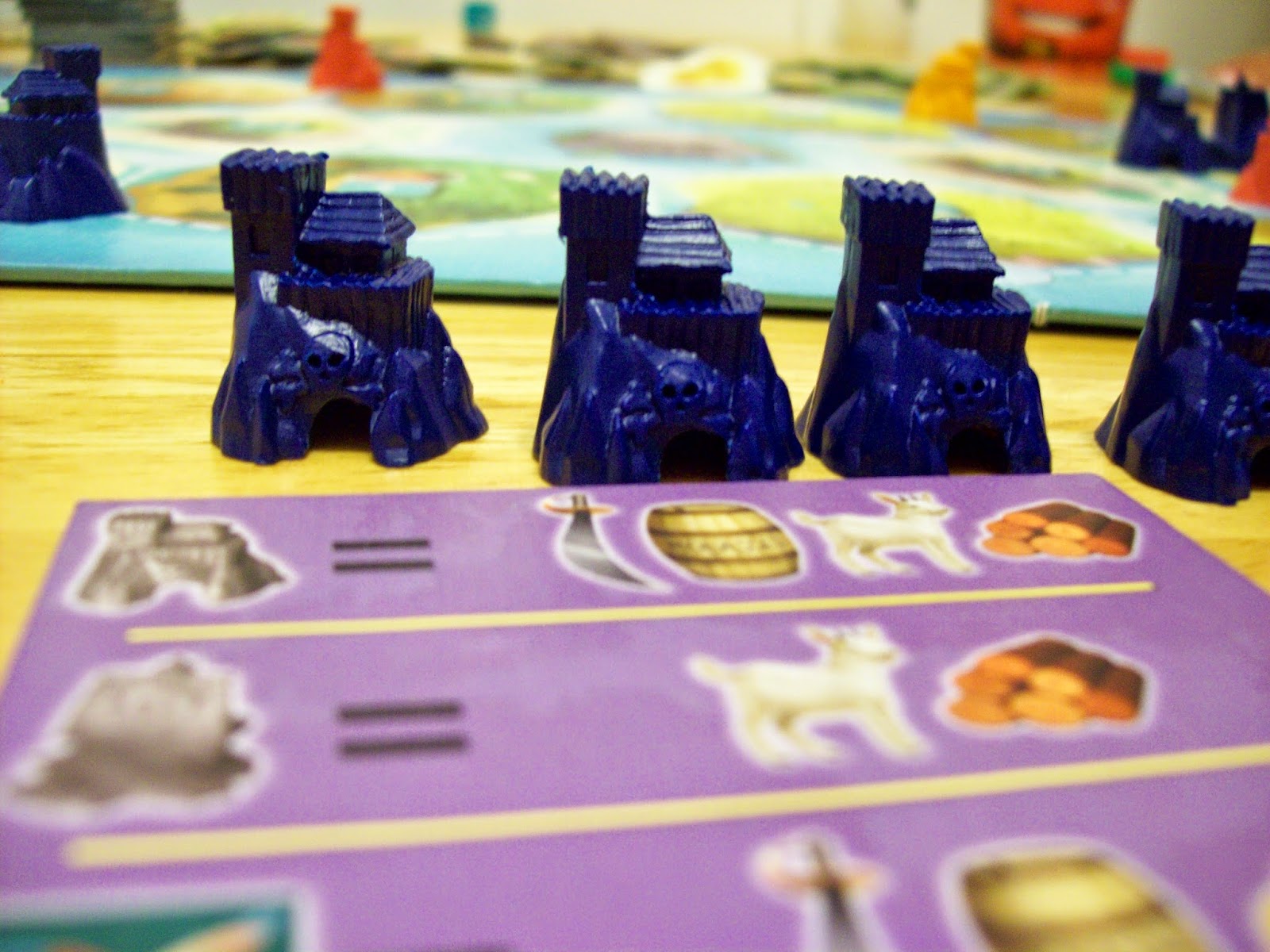 I can imagine someone painting these as minis. I really appreciate the care and attention to detail in construction -- especially since kids games usually aren't made like this. Even the die is a beautiful sea-blue that matches the board, tying back into the theme of the game. It's a joy to set up and to look at.

Set-Up:  This is the biggest deviation from regular Catan. And also a great leveler in players' skills. Each color has a designated starting spot. It puts them on four of the five resources (everyone is missing gold, which is only needed for those Coco cards we'll come back to). The numbers on the islands are fixed, and as you're rolling a single die, the probability on all of them is equel. Set-up gives you a nice spread of numbers, so that on nearly every roll, every player will get something, which helps the game to feel fast and engaging.

Play: After that, it's pretty similar. Roll the die. Collect your goods. Spend your goods. Instead of calculating victory point, each player has seven forts (two of which start on the board). The first player to build their remaining five forts wins!

Okay, maybe there is one big change: trading. It gets de-personalized. There's a market where goods can be traded in 1:1, but only once per turn. You leave the good you don't need behind and take what you need (if it's there). You can also trade with the piles as much as you like at 2:1. The rules include just-trade-with-each-other for older kids, but this is nice.

Oh, and there is still a robber. Umm, pirate ghost. You can still block hexagons with the pirate ghost, but instead of stealing resources, you simply get two of whatever you're blocking, from the pile. This is actually kind of nice, since you can get what you need. Also, no one melts down because you stole their goats.

So, roll the die. Collect goods. Decide whether you're going to build ships and forts outright, or if you're going to buy Coco cards. Block other people with the pirate ghost. First person to get all their forts on the board wins.

Ages: We play a lot of boardgames. This one is marked 6+, but the 4 1/2-year-old, who already knew how to take turn, rolls dice, etc, picked this one up very quickly. He won the first several games, in fact. The designers did a great job making the board and the game symbolism as intuitive as possible.

In Which I Wax Long About Strategy and Coco Cards:

On Boardgamegeek, I've seen a number of people complain that the only valid strategy for this game is to spam the Coco cards, nabbing as many of them as possible. The person with the most Coco cards does get to put a fort on the center, pirate-skull island, but this island doesn't collect any goods. Coco cards cost three distinct resources (molasses, sword, gold) and can give you the following:

Obviously, if you can trade in three resources and get a free fort (4 distinct resources), you've done well. In Catan Junior, Coco cards are used as soon as they're drawn. So you can take your goods from the pirate ghost or other cards and buy more Coco cards.

But there's a diminishing return. You can only trade at the market 1:1 once per turn. The pirate ghost is the worst card to draw, but the 4-resources card isn't great, either, if you trade one of the pairs 2:1 at to get what you need for another Coco card. Instead of three distinct resources, you've now got a pair plus one.  And if you're out of another resource you need for a Coco card, the remaining pair becomes another 2:1 sacrifice.

Often, a player with a spam-the-Coco-cards strategy starts with a large number of resources (say seven), and uses the resources gained from each card to continue buying cards until they hit the build-a-free-fort card. Great! A free fort! Except at the end of your turn, you might have one resource left. So the fort actually cost six resources, instead of the usual four.

Getting to place a fort in the center for having the most Coco cards is nice -- if you can keep it -- but over the course of a game, it's more expensive than it's worth. And in the meantime, that fort doesn't produce any goods.

If you're not trying to maintain supremacy in the number of Coco cards you have, there's almost no reason to trade 2:1. Ever. Unlike Catan, there's no penalty for resource-hoarding (it took several games for this to dawn on me -- I was reflexively building, building whenever I could manage).

If what I need isn't in the market, given that all the number have an equal probability of being rolled, there's a good chance I'll get what I need before my next turn and can use the resource I would have wasted trading 2:1 on something else. The board's also designed so it's hard to block people, so I'm not worried about being cut off. There is some chance that building that fort will return me more resources than I wasted in the one turn that I waited...but often not. Especially if I'd have to make more than one 2:1 trade.

Coco cards, then, become valuable only as a way to redistribute the resources you already have.* More gold than you can trade away? Buy one Coco card, but don't fall into the trap of half-a-dozen 2:1 trades to buy more, more, more. Hoard what the pretty Coco parrot brings you. Pass the die.

In practice, this has been working very well for me. The 4-year-old continues to dominate the Coco cards, but I've won every game since I started my resource-hoarding ways.   The six-year-old watches what I'm doing and is trying to figure it out. It's incredibly fun to see him work, think, and try out new strategies. Maybe sometime soon, he'll come up with a game plan better than mine.

*If we didn't have one player dominating the Coco cards, and I could get the bonus fort by having three or four or five, buying Coco card would become more tempting. I'm interested to see this play out, but I think it would probably escalate into a race/competition where those who don't participate come out on top.