Liyana helped herself to the flatbread that cooled by the fire.  It was Aunt Andra's recipe with roasted dates.  Each bite melted in her mouth and triggered a hundred memories of birthdays and anniversaries and other celebrations for which Aunt Andra had made her special bread.
--Vessel, by Sarah Beth Durst, Chapter 27

Mmm.  Date flatbread.  Vessel is full of great food descriptions, but as soon as I read that paragraph, I knew I'd be cooking this.


Some thoughts on bread first.  Most whole wheat flour in the US comes from hard red wheat.  Everything it touches tastes like wheat.  Which is great for things that want nutty, caramel flavors, but I thought it would overpower the dates.  So I used my favorite stuff: hard white wheat.  Nutritionally, it's the same as hard red wheat, but the taste is far less aggressive.  My local Wal-Mart sells whole white wheat flour, so I don't think it's too hard to find. 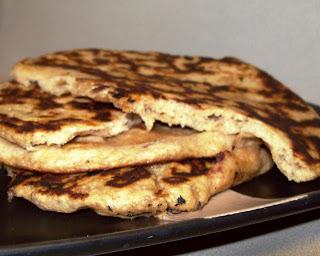 Around the time I read Vessel, I also began cultivating a sourdough starter.  Given that the people in the book wouldn't have access to commercial yeast, I went ahead and leavened the bread with my starter.  I was pleasantly surprised with the results.  The bread had a sourdough tang interspersed with bursts of honey-date sweetness, along with a smokey char from the pan.  It made a great meal by itself, though I'm looking forward to pairing this with a spicy curry in the near future.

I know not everyone has sourdough starter handy, or even a desire to make bread dough.  If you still want date flatbread, try roasting dates as in step #1, then knead them into store-bought pizza dough.  Let it rest, covered for at least half an hour, then proceed with step #5.  (Caveat: I haven't actually tried this, but I think it would work well)

*OR use 3 cups and 2 tablespoons commercial white whole wheat flour, plus 2 tablespoons vital wheat gluten.  Make sure to whisk the flour and gluten together before using, or you may get gluten lumps. 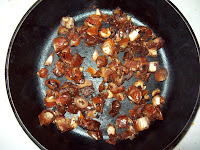 1. Finely chop the dates.  Add to a cast iron pan over medium heat, and cook until aromatic and slightly charred.  And you may want to chop finer than I did.  At this size, they had a tendency to try to tear the dough when it came to pat out the bread.

2. Let the dates steep in the water for half an hour.  After that half hour, the water should be lukewarm, not hot. 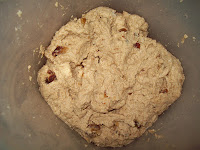 3. Mix the starter, flour, salt, dates, and yeast together in a large bowl.  You can do this with your hand or a wooden spoon.  Kneading isn't required; just bring it together into a tacky dough.

4. Let the dough rest, covered, in a warm place for about four hour, or until the top flattens.  If your kitchen is colder/warmer than mine, the time may vary.  At this point in time, the dough can be refrigerated until you want to use it.  It will stay good for several days. 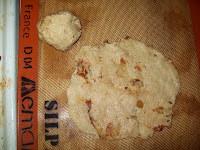 5. Preheat a cast iron pan over medium heat.  Meanwhile, tear off knobs of dough and pat into rounds.  I do this on a silicon mat, but it's just as viable to dust a counter with flour and roll them.  They don't have to be super-thin, and you can make them as large as your cast iron pan allows. 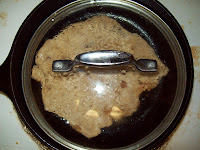 6. Grease the cast iron pan with a small amount of butter.  Lay the bread round in the pan and cover with a lid.  When the dough bubbles and no longer looks raw, flip and let it cook briefly on the other side.  Cooking time will vary by the thickness of dough and how much char you like.  I don't have specific times.  Just watch it -- after the first round, it should be easy.

7. Repeat step #6 until all the bread is cooked!  This makes about two pounds of flatbread.
Posted by MKHutchins at 7:56 PM