Sour Cream and Onion Ice Cream from Searching for Dragons

Near the end of the meal, Cimorene leaned over and whispered, "Don't take any dessert."
"Why not?" Mendanbar asked.
"Ballimore's using her Cauldron of Plenty," Cimorene said, "and it doesn't do desserts very well.  So unless you like burned mint custard or sour-cream-and-onion ice cream..."
-- from Searching for Dragons by Patricia C. Wrede, Chapter Eight

When I was a kid, we used to play a game we called "two great tastes that don't go great together."  We were especially fond of coming up with things involving ketchup and Jell-O.  As it turns out, ketchup and Jell-O sound pretty gross together.  Sometimes we brainstormed on car trips.  More often we played at the dinner table, when people were trying to eat.  Extra points if you get someone else to gag.

I thought of this bit from Searching for Dragons right away when I first considered blogging recipes.  It's actually part of the reason I decided to press on with the idea.  I've seen some fiction-inspired recipes on the web, but I could bring my own tastes -- reading and culinary -- to the party.  And, to my knowledge, no one's ever made sour-cream-and-onion ice cream before.  I thought about doing burnt mint custard, but I'd end up making a mint creme brulee, and that felt like cheating.

But I also hoped I'd be able to make it taste good.  I'd made sour cream ice-cream before, and while it was a bit strong for my tastes, it was fantastic over apple crumble.  Perhaps if I lovingly caramelized the onions, I'd end up with something buttery and caramel-like.  I took a cue from this recipe and used brown sugar to enhance those flavors.

And here's the disclaimer.  It turned out smooth, luscious, and the tang of the sour cream was softened by the sweet onions.  But, true to what it's supposed to be, it tastes like onions -- lovely, caramelized onions to be sure, but still onions.  It's edible, but I'd much rather have Ibarra ice-cream.  But, sour cream isn't exactly my thing to begin with.  My husband, on the other hand, adores sour cream and onions.  He loves this recipe.  He's having dreams of opening an ice-cream parlor now.  So be warned: your mileage may vary.  But if you like sour-cream-and-onion ice cream...this is for you. 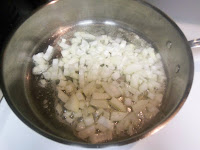 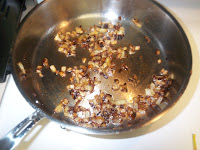 1. Put a wide, flat pan over medium-high heat and add the butter, then onions.  Cook for a few minutes, then turn the heat down to medium-low, add a pinch of salt and continue to cook for about half an hour, or until the onions are brown, slippery, and smell delicious.  Caramelized onions.  Yum.  I was tempted to just eat them all straight and skip making ice cream.

2. Meanwhile, thoroughly blend the sour cream, milk, and brown sugar.  I used a stick blender, my favorite power tool.  Vroooom....it's hard to convince the kids it isn't a toy when I'm so happy about it.

3.  Add the onions to the sour cream base.  Put this in the fridge and let it steep for at least four hours.  This is a necessary step in ice-cream making, even if onions aren't involved.  Putting the base in the fridge for a while allows it to get cold, and you want a cold base when you go to churn. 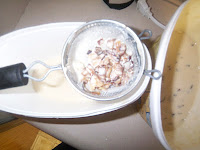 4. Strain out the onions.  I'm pretty sure little bits of onion would freeze up nasty, but by now, there's lots of onion flavor in the base.

5. Churn according to manufacturer's directions.  You can eat this right away -- it'll be soft-serve consistency --  or stick it in the freezer to "ripen" to regular ice-cream consistency.  It's stayed nicely hard, but still easy-to-scoop.  I always hold onto those plastic Blue Bunny ice cream containers, because they're the perfect thing to put home-made ice-cream in.

Posted by MKHutchins at 4:55 PM