Fruited Tallew Rice from The Way of Kings

[Barm] barely spared Kal a brown-eyed glance, then told one of his servants to go fetch some flatbread and fruited tallew rice.  A child's meal.  Kal felt even more embarrassed that Barm had known instantly why he had been sent to the kitchens.
--The Way of Kings, Chapter 37


The food in Brandon Sanderson's The Way of Kings enchanted me.  The flora and fauna of the world is different than ours, and there's a culture of food appropriate for men, women, and children.  My memory held the food as a large part of the book, so I was surprised flipping through the book that food isn't mentioned on every page.  Sanderson managed to evoke a lot with a few cunning details.

I'm sure I'll be coming back to The Way of Kings for more recipe fodder -- I already have a few things in the works.  Anyway, on to the recipe! 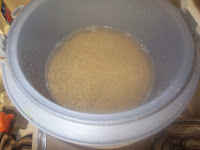 Put the barley with three cups of water in your rice cooker and hit go.  Cooking barley can be done on the stove top (bring water to boil, add barley, cover, reduce heat, simmer for about 50 minutes), but it's a lot trickier and you have to watch carefully for the spren of food-that-doesn't-suck to pull it off when it's done but not burnt. Why barley?  Tallew rice isn't found in our world, but later it's described as puffed with water.  Barley puffs well, it has a mild taste, and I can imagine it growing in the climates were people eat it.  I actually tried millet first, but the flavor was too strong. 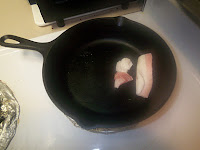 Salt the bacon fat and toss it into a small cast-iron skillet on medium-low heat.  Let some of the fat render out.  In the chapter, other people are eating fresh pork, so I imagine Bram would have some fresh pork fat on hand to make children's food on the side.  Lard works just as well, as would bacon fat (but if you use bacon fat, don't add more salt!).  I couldn't find, and didn't remember, any mention of cows (butter) or oils, making pig fat my go-to for this recipe.  You can adjust this to taste, but you need at least enough to get the bottom of the pan glossy. 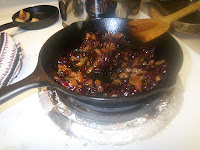 Add the dried fruit and continue cooking on medium-low until the fruit softens and turns glossy, about 15 minutes, then remove the fat.  Stir in the honey or agave.  Before you toss out the fat, taste a piece of fruit.  If it's not pleasantly porky, cook longer.  The barley's going to come out chewy, and soft fruit is a nice contrast to that.  Since we don't have native fruits, like simberries or methi, be creative!  This would work fine with raisins, but I'm all for picking less familiar flavors.  I used dried cranberries and sultanas, convenient because they don't need to be chopped.  Apricots or figs would also work great.  I'm not sure what kind of sweeteners they'd have -- maybe bees, maybe something comparable to agave -- but either one of these brings an extra layer of flavor to the pan that granulated sugar can't. 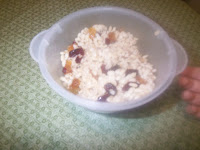 When the barley's done, fold in the fruit and serve.  The whole thing gets a nice, mild sweet-savory taste from the fruit.  The next day, these flavors mellow into the barley even more.  Unlike long grain rice, barley doesn't harden up in the fridge, so it's fine to eat cold (very non-authentically, my husband poured milk over it like breakfast cereal).  My kiddos gave me strange looks when I tried to take pictures instead of feeding them -- yes, that is an actual impatient child's hand in the photo -- then gobbled it up, so I think the flavors passed the kid-friendly test.

I promise to work on my food photography skills for next week!  Thanks for reading.
Posted by MKHutchins at 7:56 AM