Rejiggering The Thingamajig And Other Stories and High Frontier 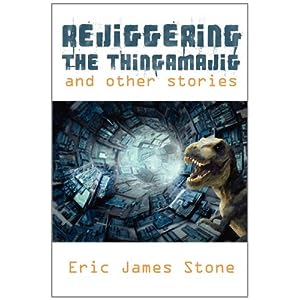 The Book (by Eric James Stone): A Nebula Award winner, Hugo Award nominee, and winner in the Writers of the Future Contest, Eric James Stone has had stories published in Year’s Best SF 15, Analog, Nature, and Kevin J. Anderson’s Blood Lite anthologies of humorous horror, among other venues.
One of Eric’s earliest memories is of seeing an Apollo moon-shot launch on television. That might explain his fascination with space travel. His father’s collection of old science fiction ensured that Eric grew up on a full diet of Asimov, Heinlein and Clarke. --Bio from Eric James Stone's website

The Game (from Sierra Madre Games):
In the near future, nanofacturing techniques will allow incredible new materials to be built atom by atom. But they can only be built in the zero-gravity and high-vacuum conditions in space. Various private and government enterprises race to establish a buckytube mechanosynthesis factory on a suitable carbonaceous asteroid. To do so, they accumulate tanks of water in orbiting fuel depots, to be used as rocket propellant. Also needed are remote-controlled robonauts to do the grunt work.
The key to success is water in LEO (low Earth orbit). At first, water will be expensively upported out of the deep gravity well of Earth. But for a third the fuel and energy, water can be supplied from Luna, the moons of Mars, or other nearby hydrated objects. Extracting resources at the work site is called In-Situ Resource Utilization (ISRU). Whoever develops ISRU technology able to glean water from space rather than Earth will gain the strategic high ground to make money through exoglobalization. --Board Game Geek Description

The book, as you've probably noticed, is a collection of stories.  I love short fiction and Eric James Stone writes amazing stuff; check out his bibliography.  A number of his stories are also available free online if you haven't read his work before (I have a soft spot for the humorous touch; "Rejiggering the Thingamajig" and "The Greatest Science Fiction Story Every Written" are two of my favorites, but I hate to say that because I want to include a dozen others).  "Resonance" is the first story of his I read; it's about a technical difficulty building a space elevator.  Like so many of his stories, the science is detailed, realistic, and fascinating.

And that's the story that High Adventure reminded me of.  I've never played a space game like this -- it has a level of detail that leaves my inner nerd in awe.  Escaping low-earth orbit is costly and time consuming.  The higher the mass of your rocket, the more fuel it takes to more, but as you burn fuel, your mass drops.  The thruster, robonaut, and refinery patent cards all include nifty diagrams and equations for hypothetically possible inventions.  I haven't included pictures of game boards before, but this one speaks volumes.

Yes, the first time I saw this, my head exploded.  Part of me wanted to flee the room; I had no idea what to do with all those lines.  Going over the rules confused me more.  Then we started playing and it smoothed out.  Soon enough, I'd boosted my solar sail into orbit and was hitting a scientific point of interest for later victory points (one in the inner solar system, of course, as the sail doesn't work so well out by Jupiter).  What with learning how to play, I came home late that night.  I distracted my husband with this shiny picture and talk of the rockets I'd built; he became too engrossed to remember to be grumpy (win!).

I haven't managed to build a space elevator in High Frontier yet, but everytime I see that spot on the board, I think of "Resonance."  Maybe next time I play, I'll manage.  Building a space elevator isn't easy.